Laurieston Living forms part of the Transforming Communities Glasgow initiative and is one of eight Transformational Regeneration Areas (TRA) in the City. Urban Union was appointed the long-term private sector development partner for the TRA in 2012. This allows Urban Union to work closely with all stakeholders which include the local community, Scottish Government, Glasgow City Council, New Gorbals Housing Association and Glasgow Housing Association to deliver an ambitious and extensive regeneration project.

Urban Union is a unique partnership formed by McTaggart Construction and Robertson Group Holdings to specifically deliver large-scale regeneration projects. Both partners have a proven track record in delivering mixed tenure projects and working to deliver ‘community benefits in procurement’ in Glasgow, Edinburgh and further afield.

Laurieston Living is a shining example of a successful regeneration project. Delivered by Urban Union, it is a £140m revitalisation of Laurieston in the Gorbals area of Glasgow with plans to deliver a total of four phases over a nine-year period. This will include over 1000 mixed tenure homes, community facilities, open space, recreation areas and potentially, hotel, office and retail provision.

Historically, the Gorbals has a reputation for deprivation and poor housing. However, the city of Glasgow is undergoing a renaissance, particularly in the eight Transformational Regeneration Areas. These TRAs are specific parts of the city which face long standing socio-economic challenges. The City Council backed by Scottish Government have pledged to address these challenges and regeneration of the housing and infrastructure is a key part of the strategy. The work undertaken by Urban Union in Laurieston is helping to transform and rebuild the community, reconnect it with surrounding neighbourhoods, changing perceptions, and ultimately improve the lives of local residents.

Laurieston is not merely the regeneration of bricks and mortar but the regeneration of a community. The team is committed to ensuring a coherent, sustainable approach focused on long-term projects which support growth and community living. From the beginning of the project local representatives were chosen to contribute to the overall masterplan. Urban Union regularly discussed plans with this group, with a public consultation on the final masterplan held locally and received very positively. As development has evolved this approach has been maintained and the growing community informed and involved at all stages. Urban Union is dedicated to delivering educational opportunities in the construction industry for local young people, supports local community groups, events and delivers a diverse and inclusive arts programme.

Urban Union has partnered with Holyrood High School in Glasgow to introduce an employability programme – trailblazing a better future for bright young people to support them through a pathway from school to further education.

Laurieston also has a dedicated community benefits officer who engages with the local community and stakeholders in ways that truly benefit them.

Urban Union is a sponsor and supporter of the Citizens Theatre, an organisation firmly rooted in the local community. This support is primarily given because the Citizens is committed to enhancing the lives of all kinds and ages of people in Glasgow and beyond; producing theatre for children and young people, community productions and delivering a pioneering range of creative participatory projects for varied communities and in the education sector.

Together with GCC and NGHA, Urban Union facilitates and supports the Men’s Shed Initiative and the wider improvement of the railway arches which bisect the Gorbals area from north to south. In addition, through our arts programme, community involvement allows people of all ages to contribute to place making throughout the development in way marking and heritage trails.

Urban Union has also partnered with The Barn, a local youth group, to create a vital volunteer network. These volunteers support local young people in areas such as diversionary youth work, positive choice encouragement and the provision of disability support, all of which we believe are catalysts for social change. Over 30 years, The Barn has contributed to re-energising social interaction in the area, reporting a 300 per cent increase in usage. Urban Union made a sizeable donation to The Barn, which has now been significantly renovated to allow it to better serve local young people. Urban Union regularly support events held in the facility i.e. the Gorbals Fair, Glasgow Science Festival, Haud the Bus

As Laurieston is within a regeneration area, one of the key challenges has been ensuring that people who are already living in the location are fully on board with our plans. Linking the area’s past with its future has been a significant driver for Urban Union and that is why such time and effort has been put into establishing an arts and living strategy and a community engagement strategy. These combine to ensure that Laurieston Living is embedded in the community, and not simply a new development that stands alone.

To date, the focus has been on providing high quality accommodation for local people. While that will continue in the second phase, there will a noticeable shift towards addressing the wider needs of the community. One of the key aspects of that will be the creation of a Linear Park – providing Laurieston residents with greenspace they can call their own. The park will be the fabric that knits the community together and will connect the area to the New Gorbals at Crown Street, Tradeston and the City Centre via the Carlton Place Suspension Bridge. 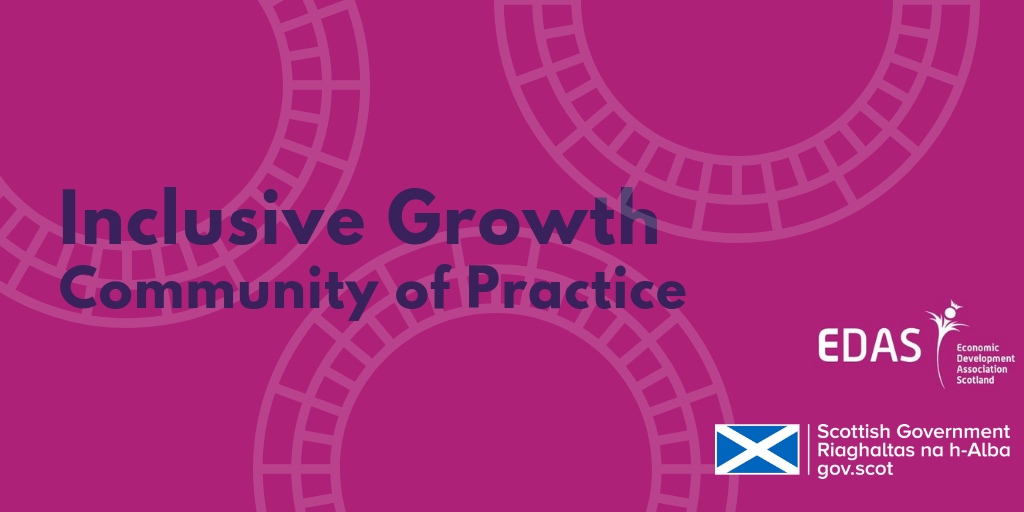 The Inclusive Growth CoP allows policy makers and practitioners to explore how best to deliver activities that promote this key government objective. EDAS will also be delivering related CPD training. This initiative is aligned with the Government’s Scottish Centre for Regional Inclusive Growth.